Get me outta here!

One of the highest privileges I’ve received is that of serving as Pastor for the community of The First U.P. Church of Crafton Heights for the past 26 years.  In 2010, this group granted me a four-month Sabbatical from my ministry for a time of recharging and renewal.  In 2019, they extended that offer again – so I’ve got three months to wander, wonder, and join in life in a  different way.  This time has been divided roughly into thirds. For three weeks, my wife and I ventured through 8 states and many, many National Parks on a great RV adventure (chronicled in the June 2019 entries).  I spent virtually all of July in Africa, learning about and experiencing partnership in mission (the July 2019 entries).  In August the game plan changed once more – mostly time alone, and (mostly) 21 nights in the same bed – as I entered into a sanctuary known as Seneca Lake State Park in Eastern Ohio.  While here, my focus will be mainly on the interior life: reading, thinking, praying, and so on…

Lucia got a new lunchbox from her great-grandmother – to help her get ready for school!

My time of rest, study, and reflection at Seneca Lake was transformed for about six days with an infusion of time with people I love dearly.  In addition to a few close friends from Pittsburgh, the time was fundamentally shaped by the ability to share this place with, at various times, my wife Sharon, my daughter Ariel, and my granddaughters Lucia and Violet. Ariel and the girls arrived on Wednesday, and we had some wonderful experiences, including pie and pearsauce making, swimming, reading, and lots of bubbles.  Ariel left as Sharon arrived on Friday evening, and we had a couple of fantastic grandparenting days with the girls.  Sharon was constrained to leave on Sunday morning, and that evening Ariel returned to pick up Violet – leaving Lucia and me to a couple of days of Camp Grampy.

In the midst of all this, the cabins around mine were inhabited by other families on different missions.  Lucia watched one child, an 8 year old girl, wistfully, and wondered if she’d like to play together.  Her nervousness prevented her from making a move for a day or so until, with Sharon’s encouragement, she went over and broke the ice. The child was happy to come to Cabin #4 and roast some marshmallows and make some popcorn.  As all of this was unfolding, of course, Sharon and I were doing the kinds of things that grown-ups do in these situations: we were trying to get Lucia to make an accounting for herself.  “Tell her who you are, sweetheart”, we said. Of course, what we meant was “tell her your name, and maybe how old you are…”

How many times have you been told, or instructed someone else, to “say who you are”? Wouldn’t life be a series of existential crises if we really had to do that all the time? I mean, really say  who we are?

“Um, hi…. I’m an extroverted grandfather with this particular set of insecurities; I have these hopes, these skills, and an overinflated sense of my abilities as a bowler and baserunner… I like to cook and read and tell stories, but I’m afraid that sometimes I like telling them more than you like listening to them… My favorite color is red, and I really like to watch movies and talk about them with people, but I’m reluctant to invite you to do that because I’m afraid you’ll think that’s odd…”

You see what I mean?  If we really had to tell people who we are – what particular bundle of emotions, insecurities, strengths, confidences, and behaviors make us into ourselves – well, it would just be exhausting.

And yet that is one of the prime tasks of a Sabbatical, I think.  I’m supposed to step away from all the things I normally do  and spend some time thinking about who it is that I’m supposed to be.

The girls loved having the chance to sing along (and help play)!

In an odd, and yet beautiful way, this became clear to me during a conversation I had with Lucia while the two of us were out on the boat the other day.  She asked what day it was, and I mentioned that it was Sunday.  She thought about that for a moment, and then she said, “But you didn’t go to church, Grampy. You always go to church – even when it’s not Sunday.”

I said that yes, typically that was true, but that this summer I was spending my time in a different way.  She continued, “So you are taking a break from working at the church, Grampy?  Are you sad about that?”

I replied that there were a lot of things that I missed about being connected with so many of the people who are so important to me, but it was important to the church and to me that we have a little break.

After a brief interlude, she wandered into my lap and said, “Well, I’m glad that you are taking a break from your church job so that you can keep on doing the job that you don’t get a break from.”  I asked her what that was, and she said with a big smile (and perhaps, a little condescension in her voice, although I might be making that part up), “Taking care of ME! You can’t always go to church, and MorMor can’t always go to her work, but we can always take care of each other, Grampy.”

The kid is not wrong…  Like many of us, I suspect I spend a little too much energy conflating what I do  with who I am.  The weekly Sabbath is an opportunity for us to do this with some regularity, of course (“Remember the Sabbath… and remember that you are fundamentally a person who has been freed from bondage” [my very loose paraphrase of the 4thcommandment]).  We are invited to stop our striving and our doing and our working and to remember that there is One who is and does and makes and heals and reconciles in a way that is not dependent on our ability to accomplish those things.  A pastoral Sabbatical is a longer, much rarer (my last one was in 2010) invitation to allocate time in a different way so as to more fully embrace the times and the people with whom I’m presented with the energy I’ve been given.

It was great watching the kids get more comfortable in the water! 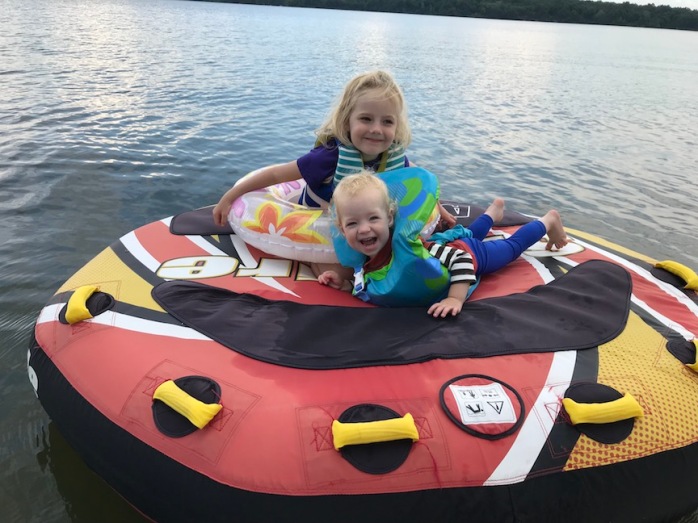 MorMor’s love for puzzles is taking root in this generation.

I am deeply grateful for this rare privilege I have had this past week to spend such intense time exploring life in the company of my daughter and granddaughters.  Stretching out and reading stories, making pie, building fires, wishing we could catch some fish, telling silly jokes, and just, well, being ourselves in front of each other.

I’m hoping that you have someone with whom you are free to be you today, without having to explain too much of anything. In addition, I hope that you are able to find some time to think about who you are supposed to be  as well as all the stuff you have to do.

One of the great opportunities of “Camp Grampy” was our plan to spend a night sleeping on my boat “Visitation”. Here we are setting off.

No toilet on the boat? Think again! Lucia getting her “bucket potty” ready for the night. 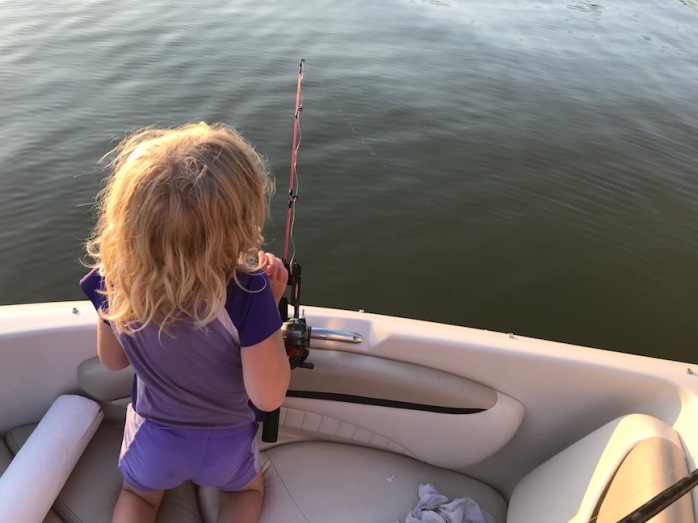 We did a lot of fishing, but precious little catching.

Lucia asked for the camera so that she could have a picture to remember what I look like when we fish together. Now you can know this, too!

It turned out that there were TOO MANY MOSQUITOS for us to sleep on the boat, but that didn’t stop us from getting breakfast at the Boat Restaurant! I asked Lucia if she wanted to eat at the restaurant, and she said, “Grampy, do you think that they will have biscuits and gravy?” That’s my girl!

She took a lot of “nature photos” – here, capturing a dandelion so that she can share it with her teacher.

One thought on “On Saying Who You Are…”

This site uses Akismet to reduce spam. Learn how your comment data is processed.

What I’ve Been Reading

Letters and Papers from Prison

On April 5, 1943 German pastor and theologian Dietrich Bonhoeffer was arrested and imprisoned in Berlin.  He had long been opposed to the regime of Adolf Hitler and critical of much that typified the 3rd Reich.

I started re-reading this volume as the quarantine/self-isolation associated with the outbreak of COVID-19 shut down much of our world; I concluded it as we watched an increasingly polarizing divide in our nation around issues of race, “law and order”, and the use of military and police power in the domestic sphere.

Much of what is contained herein is mundane – gratitude for a visit or a letter, enjoyment of a parcel, and so on.  There are some incredible theological gems: I have long appreciated, for instance, his “Wedding Sermon from a Prison Cell”.  I am struck by his profound transparency, and his commitment to growth in faith and as a person even in the face of incredible challenges.

What struck me most on this reading, however, was the depth of intimate friendship that is displayed here, particularly between Bonhoeffer and Eberhard Bethge.  I am increasingly saddened by the fact that so many men, particularly American men, do not participate in intimate friendships.  “The man who is ignorant of this area of freedom [friendship] may be a good father, citizen, and worker, indeed even a Christian; but I doubt whether he is a complete man…”

The volume includes poetry and prayers as well, and I would commend it to anyone who is willing to explore the relationship between faith and practice, the notion of true community, and the power of love.

Catch of the day – the freshest posts

A look into the tackle box…some common themes and tags…